“Bath salts” are in the news again, as Miami police suspect these synthetic drugs were involved in the recent face-eating incident.

Legislatures and law enforcement across the country are taking measures to try to control the use of these dangerous drugs, which can cause severe paranoia and hallucinations in people who use them. Most recently, the U.S. Senate added an amendment to an FDA bill that would classify bath salts as Schedule I drugs, making them illegal to distribute. There is still a long way to go before this becomes law: the amendment still needs to be adopted by the House of Representatives and then the bill will need to pass both houses and be signed by the president.

In the meantime, the U.S. Drug Enforcement Administration has issued an emergency order that bans bath salts. Closer to home, Vermont first took action against bath salts last August, while Maine passed an initial law in June before strengthening it with new laws in September and April.

The local laws seem to have made a difference. Calls to the NNEPC regarding bath salts peaked last June and have been on a general downward trend since. 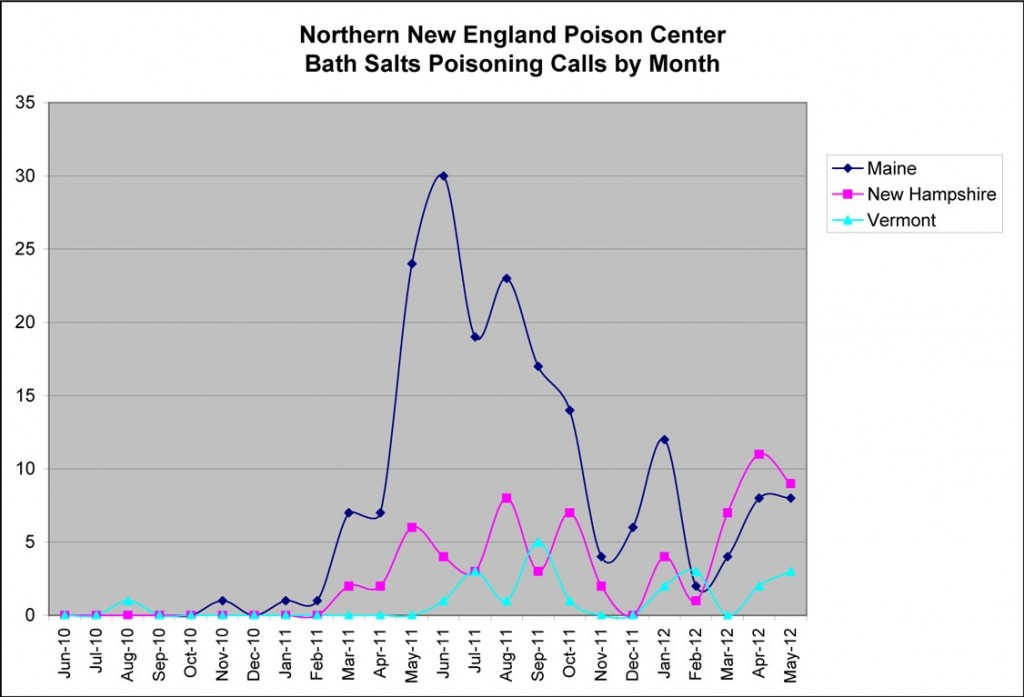 However, it’s possible that as hospitals have become more familiar with bath salts, they are calling the poison center less often for treatment advice, so fewer calls doesn’t necessarily mean less use.

We also saw an uptick in bath salts calls in April and May, especially in New Hampshire, and we’ll continue to monitor this to see if it is a trend. New Hampshire has no local laws about bath salts, and police in the border town of Berwick, Maine, recently stated that they are dealing with bath salts users who bought the drugs in New Hampshire.

While behavior as extreme as what happened in Miami is not common, people who are high on bath salts are often a danger to themselves and others. If you think someone is high on bath salts, do not go near the person, especially if you are alone. Call the police or 911 for assistance. If you can’t avoid the person, Lt. Tom Reagan of the Bangor Police Department offers the following advice:

Further reading: The Christian Science Monitor took a look at the recent incident in Miami and the most recent information on bath salts. NNEPC Medical Director Dr. Tamas Peredy was quoted.