The NNEPC has noted a significant increase in self-harm-related poisonings among children 16 years old and younger over the past several months in Maine, New Hampshire and Vermont.

From October 2020 to May 2021, the center managed 560 cases of self-harm among patients in this age range, more than 50% more cases than average for an eight-month span. The increase comes after self-harm cases in this age group fell slightly during the first few months of the COVID-19 pandemic.

The increase has been most significant among patients 13 and 14 years old, with the average number of cases per month during this period (30) nearly double the monthly average from 2017 to 2019 (16). 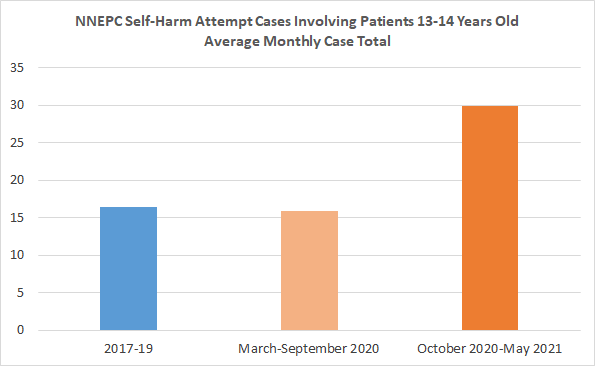 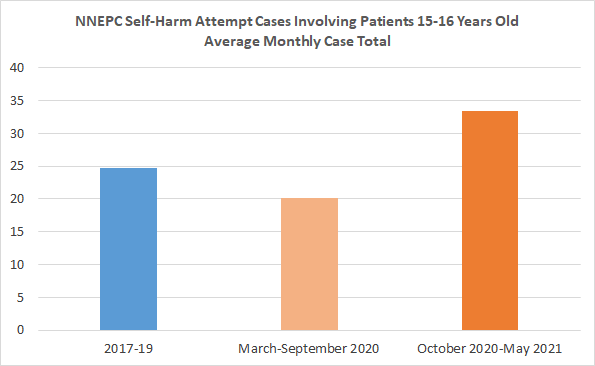 The increase in self-harm cases was mostly due to attempts by girls.

NNEPC self-harm-related poisonings have fallen overall since the beginning of the pandemic, and within most age groups the number of cases has remained well below 2017-2019 levels in recent months, making this increase among young people even more notable.

In addition, parents, teachers and others who work with youth in these age groups should be familiar with the risk factors and warning signs for self-harm and resources available for help.

The National Suicide Prevention Lifeline is available 24 hours a day to provide free and confidential support for people in distress, as well as prevention resources for those close to them. Call 1-800-273-8255 or visit suicidepreventionlifeline.org to chat online or get more information. Other resources include:

The NNEPC is available 24/7 at 1-800-222-1222 to provide fast, expert advice in cases of possible poisoning, and to answer questions about medications and other potential poisons.

Further reading: Similar national trends were noted in a June issue of the CDC’s Morbidity and Mortality Report.

This entry was posted in Data, Poison Prevention, Regional News. Bookmark the permalink.