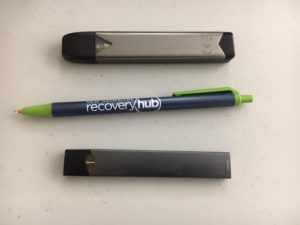 A Juul e-cigarette (bottom) and a similar-looking Juno device (top), with a pen for scale.

Looking similar to a USB flash drive and easily hidden, Juul electronic cigarettes have rapidly grown in use among teenagers. Dubbed by some the “iPhone of e-cigarettes,” Juuls are so popular that “juuling” has become a verb, a particular type of “vaping,” the word used to describe e-cigarette use in general.

Like other e-cigarettes, Juuls consist of a mouthpiece, a reservoir for liquid nicotine solution, a heating element and a battery. E-cigarettes come in many forms, from slim “vape pens” to palm-sized rectangular “box mods,” with a wide range of customized devices on display across the internet. Juuls are easy to use, helping to make them the top brand of e-cigarette—they account for 55% of overall sales—and they are also easy to hide, making them popular among high school and even middle school students, raising concerns among school systems across the country.

E-cigarettes do not contain many of the known cancer-causing ingredients found in traditional cigarettes, which may make them a less harmful choice for adults who already smoke, although it is unclear at this point whether they are an effective way to help people quit. Meanwhile, as of 2016, vaping as a fad had introduced more than 750,000 teenagers who had never smoked to nicotine, a highly addictive substance.

While some e-cigarettes have nicotine-free versions, this is not the case with Juuls, which have some of the highest nicotine concentrations on the market. In addition to the potential for addiction, this also makes it easy for teens to overuse. Many calls to the NNEPC related to e-cigarettes involve teens and adults who have become sick from overusing these products, experiencing symptoms such as headache, upset stomach and anxiety. On top of this, many teens may not realize Juuls contain nicotine. A recent study found that nearly 2 in 3 teens and young adults who used Juuls did not realize that all Juuls contain nicotine.

The long-term effects of e-cigarette use won’t be known for some time, but there is strong evidence that introducing addictive substances to teens’ developing brains can make them more susceptible to other addictions later in life. One study has also found that teens that use e-cigarettes are more likely to transition to traditional cigarettes, as well.

It’s important for teens to understand the risks related to e-cigarette use. The surgeon general’s office and the CDC have produced a tip sheet for parents to get the conversation started about nicotine use.

If someone is feeling sick after using e-cigarettes or tobacco products, call the poison center right away at 1-800-222-1222, chat online or text POISON to 85511.