Are boys more likely to get poisoned than girls?

Do young boys get poisoned more often than young girls? In our house the answer appears to be yes. Just the other day I caught my 10-month-old son with the bathroom soap in his mouth. Here is the picture with bite marks to prove it. 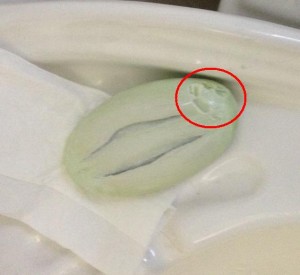 Just last week he somehow sneaked into the kitchen and opened up our liquor cabinet without my noticing until he had already grabbed a bottle of wine! He is so close to walking on his own. He can stand and take a step unassisted. I am excited to see him running around the house, but also nervous—his new found freedom will also mean more access to possible dangers.

He seems much more interested in getting into things that are not safe than his older sisters ever did. Is it because he sees everything his sisters do, and thinks he can too? Or is it because we now have three and it is harder to supervise him as closely as we did his sisters? Is it because he is boy and genetically different? Or is he just naturally more curious than his sisters?

According to the World Health Organization, “Boys have higher rates of poisoning than girls in all regions of the world, probably because of differences in socialization.”

Northern New England Poison Center calls show a similar pattern. Among kids five and under, boys accounted for nearly 54% of unintentional poisoning cases in 2012. Among one- and two-year-olds, it was close to 53%. These numbers don’t include medication errors by caregivers.

Regardless of the reason, young boys do seem to get into potentially poisonous things more often than girls, although the difference is small. The important thing to remember is that most poisonings are preventable. Do what you can to prevent poisonings:

This entry was posted in Poison Prevention. Bookmark the permalink.